"Robert and I are getting married"

I was in Houston spending the Thanksgiving holiday with my in-laws when I received an email from my Tito (that means Uncle in Tagalog) Richard and saw the subject line: "Robert and I are getting married". I screamed (in my head) with excitement and started to cry happy tears. I don't want to talk too much about his email but it briefly explained why he didn't picture himself getting married at first and why now was the time. And although it was brief - a very Tito Richard type of email - it spoke volumes.

A bit about my uncle. I always thought he was a pretty serious person. Growing up, I was kind of scared of him because of how serious he is lol. He used to babysit me and my siblings whenever when my dad had to work late and my mom had to leave for work (she used to work night shifts). He was studying to become a nurse at the time and when you see a ton of books spread all over your kitchen table, you know it's serious. So we never really bothered him and we were scared to. I also thought he was kind of mean. One time, my siblings and I were at my grandma's (his mom, we call her Mamang) and I was wearing some kind of colorful t-shirt, black leggings, with yellow stretchy shorts layered over the leggings. The only reason why I remember what I wore was because when Tito Richard saw me (he was living with Mamang at the time), he said, "Eww. What are you wearing. You should be on that show "What Not To Wear"." And then headed upstairs to his room. So that's why I thought he was mean BUT whenever I think about that moment now, it's actually funny and it made me think more about my outfit choices (btw I agree it was hideous). As I got older, I realized that even though he can be pretty serious, he's not that scary or mean, and is a lot of fun. He's a foodie, loves a good cocktail, fashionable, into interior design, an artist and an adventurer, and - most importantly - a loving and caring fur-dad, uncle, brother, and son who always wants the best for the family, especially for Mamang.

Tito Richard and Robert met on January 23, 2010 and they got married on the same day, 10 years later. TEN. YEARS. I didn't realize they were together for that long. Uncle Robert has been around our family for so long that it felt like he was always a part of it. So much so, his name was even added on to our family t-shirt that we all wore on a family cruise trip in 2012! From the beginning, he was our Uncle Robert. He complements my uncle really well, being the not-as-serious one in the relationship and the jokester. He'll sometimes make fun of my uncle and how serious he is - one of the many reasons why I love Uncle Robert. Along with being a fun person to joke with, he's a great listener and easy to talk to. Together, they make the perfect pair of foodies, the ultimate party hosts, the best dog fathers to Charlie - ultimately a perfect couple to be around.

I picked up my grandma before heading to San Francisco City Hall which is where we met up with my uncles, Uncle Robert's mom, his son & son's fiancee, and my uncles' friend. Prior to this day, when Tito Richard asked if I could take photos of their ceremony I was SO excited & happy but also nervous. My uncle is an artist himself. Before he studied to become a nurse, he also studied art & photography so I felt a lot of pressure to photograph his special day perfectly. I told him I was really nervous. He told me, "You'll be fine. You're great. Don't be nervous." We waited until it was their turn to go through the marriage process. If you've ever gone through the experience of the ceremony process at SF City Hall, the part before the actual ceremony isn't so glamorous but I still find it worth documenting. We all hung out while I photographed, and then finally had the ceremony. It was simple, intimate, and beautiful.

We proceeded with photos around other parts of City Hall, doing the group photos first. I kept my cool and tears in check (for the most part) all throughout the car ride to SF and the ceremony, so I thought I had my emotions under control by this time. When I started taking the formal photos of my grandma and Tito Richard, I asked him to give Mamang a little peck on the cheek...and then I lost it. I don't see them (or my family in general) show affection to each other very often so when the love, happiness, and cuteness unfolded in front of me, along with having pent up happiness and emotions, and thinking about my grandpa and how it would have be so sweet for him to be there (my grandma talked about him a bit on our way to SF which contributed even more to my already emotional state), I cried. Uncle Robert walked over and asked if I was okay. I had to assure him I was okay and that I was just extremely happy lol. When I finally pulled myself together, we continued taking photos and YOU GUUUUYYSSSSS. My uncles were seriously so cute and it was a lot of fun getting to photograph them and witness the two of them be SO. IN. LOVE. Afterwards, we all headed over to Michael Mina and enjoyed a multi-course dinner with delicious drinks. If there's anything my uncles will go all out for, it'll be for food. My uncle's twin brother joined too! A couple of days later, they celebrated their marriage with the rest of our family and their friends at Bardo Supper & Lounge Club. It was 1950s/Mad Men-esque attire, which was optional but c'mon - if there's a theme, you gotta dress for the occasion!

I always imagined everyone in our family having a big-ass wedding day with traditional elements. But nowadays, weddings aren't very traditional. And Weddings, no matter the size and execution, are about the couple and how they want to celebrate it. The way my uncles planned their special days was perfect and really fit who they were as a couple. I don't think I could imagine their union celebrated any other way.

Love you Titos, and welcome to the family, officially, Uncle Robert! 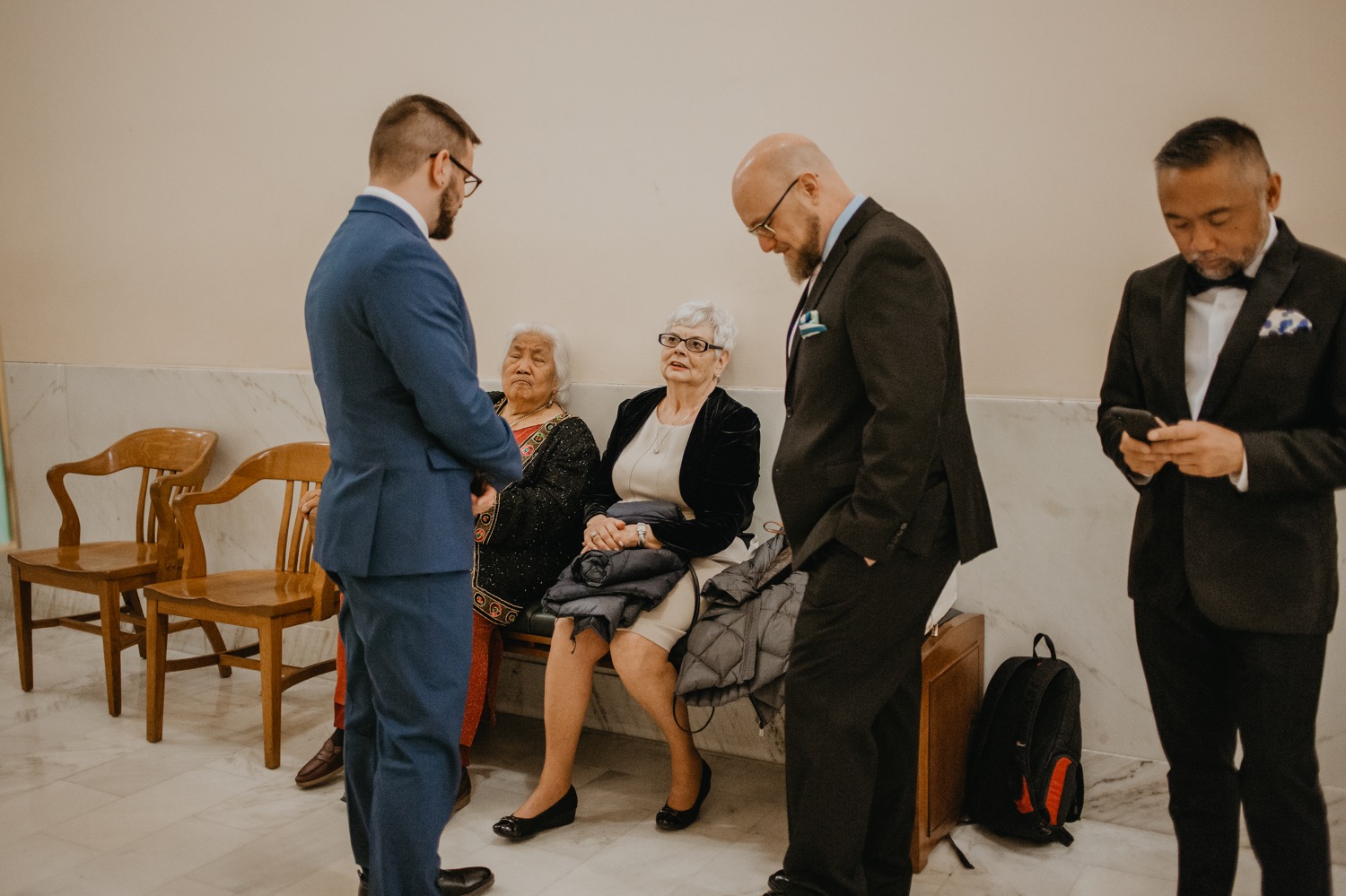